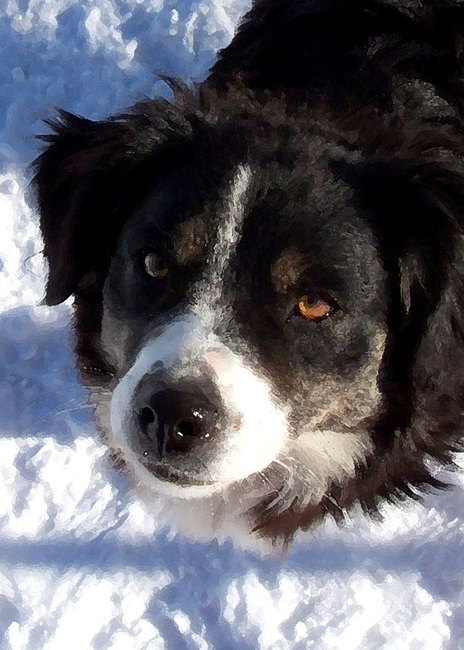 The Australian Shepherd and its smaller counterparts.

Views are passionately defended in both camps - bewildering to those simply looking for a smaller, devoted family companion or compact ranch dog.  The truth is, both stances express valid arguments, but unfortunately some members in both camps have become increasingly offensive in the propaganda bandied about.  To be clear, all Australian Shepherd clubs do agree, albeit begrudgingly, to a common ancestry, but that is where they draw the proverbial line in the sand.  We believe historical facts show the Australian Shepherd and its miniature counterpart to be undeniably, closely intertwined.

The moderately-sized, colorful herding dog, which would one day be known as the Australian Shepherd, arrived in the United States in the early 1800’s – likely brought in by the Basque shepherds.  These animals quickly became well-known for their herding ability, intelligence, and unusual coloring - making them highly sought after by ranchers as well families on small homesteads.

Through the early 1940’s, this hardworking, athletic dog was known by many names including the Spanish Shepherd, New Mexican Shepherd, California Shepherd, Bob-Tail, Little Blue Dog, and Pastor Dog.  *Well before these wonderful ranch dogs had a formal name, my Aunt began raising them; as their popularity grew, she helped organize the first Australian Shepherd show in California and donated some of the awards for the winning dogs, so our family has a long-term, affectionate history with the Aussie.

We will be covering, in some detail, the basic breed history, however, we will not address every registry or breed club to have recognized or hosted these breeds, nor will we cover the history of the “Toy Australian Shepherd” here; we merely wish to show an accurate timeline regarding the development of the Australian Shepherd.

Entry into one classification or the other was determined by individual, adult size; animals 17” and under at 1 year of age could be entered as “Miniature”.  For breeding purposes, as these animals shared the same lineage, animals from either category could be utilized interchangeably between the AS and MAS registries.

Formed in 1957, ASCA is considered the “parent club” of the Australian Shepherd, though the club relied upon the IESR registry for record-keeping services until 1971; it was not until 1977 that a formal breed standard was finally adopted.  Interestingly enough, the ASCA breed standard states “Preferred height at the withers for males is 20 to 23 inches; that for females is 18 to 21 inches, however, quality is not to be sacrificed in favor of size.”

Revisions to the current ASCA breed standard have been proposed; it is expected their membership will vote regarding the matter sometime this year (2012).  Surprisingly enough, in spite of the uproar regarding the smaller Australian Shepherds, the proposed revisions do not include additional specifications or disqualifications for deviations in size.  It appears size alone will not be a disqualifying factor for the ASCA-registered Australian Shepherd.

The UKC recognized the Australian Shepherd as a herding breed in 1979.  The original breed standard states, “Preferred height at the withers for males is 20 to 23 inches; that for females is 18 to 21 inches. However, quality is not to be sacrificed in favor of size.”

It should be noted that, while the current breed standard retains the phrase, “However, quality is not to be sacrificed in favor of size”, a 2008 revision to the said standard deems significant variations in size to be eliminating faults.  *An Eliminating Fault is a Fault serious enough that it eliminates the dog from obtaining any awards in a conformation event.

As UKC has taken several strong stands toward maintaining the working integrity of the breed, this is our preferred registry.

In 1989 – 1990, the RBKC recognized the Miniature Australian Shepherd - allowing the animals the opportunity to compete in, what was at that time, a recognized show venue.

The breed standard adopted by the AKC states for size:  “The preferred height for males is 20-23 inches, females 18-21 inches. Quality is not to be sacrificed in favor of size.”  Interesting to note, yet again, deviation in size is not a disqualification.

Established in 1991, ARBA is a nationally-recognized conformation show venue, founded for the purpose of allowing unrecognized or otherwise rare breeds the opportunity to compete in a show venue.  Anxious to have their smaller Aussies participate, MASCUSA worked diligently toward ARBA acceptance.

The 1993 name change brought with it a change of name for the club as well - though it should be noted the club also retained their original moniker “Miniature Australian Shepherd Club, USA”.  The breed standard remained as originally stated.  *formerly MASCUSA

The breed standard states:  “Preferred height at the withers for males is fourteen (14) to eighteen (18) inches; that for females is fourteen (14) up to but not including eighteen (18) inches. Dogs or bitches above these measurements should be faulted to the degree of variance; however, quality is not to be sacrificed in favor of size.  Disqualification: Below 14” at the withers.”

In 1998, an ARBA policy change again prompted a breed name change; getting back to their roots, the club combined names, and the “North American Miniature Australian Shepherd” was born.

In May, 2002, membership voted in a specific breed standard, which states the NAMAS size to be as follows:
SIZE: Height for dogs and bitches is 14 inches up to 18 inches at the top of withers. “Quality not to be sacrificed in favor of size within the guidelines of this breed standard.  Severe fault under 14 inches and over 18 inches.”

POLITICS BETWEEN THE MAS BREED CLUBS

While there were significant differences between the MAS clubs, the members have attempted to work toward mutual goals; dual registries have been commonplace, and both clubs combined “National” show events to the same location and time - allowing for qualified animals to be utilized interchangeably.

At one point, it seemed combining the clubs would be beneficial; club officials on both sides worked persistently for several years, only to find the differences between each clubs’ politics and goals too vast to bring together.  A strong desire by many members to be recognized by nationally-known registries was the deciding factor in the failure to unite the clubs.

With a vote put to both clubs, it became clear there was a definite, irreversible separation between the registries.  After the numbers were tallied, it was easy to conclude there were, in fact, enough members interested in obtaining separate recognition, thus prompting members of NAMASCUSA to approach the AKC with the idea of creating a new “breed”, one not flying under the Australian Shepherd title.

In May 2011, MASCUSA (formerly NAMASCUSA) was chosen by AKC as the parent club of the newly named “Miniature American Shepherd” breed (FSS).  The club is currently working toward full, AKC recognition and acceptance.

THE TRUTH OF THE MATTER IS...

The proposed Miniature American Shepherd breed standard calls for a greater size separation between the breeds - in time, eliminating the "overlap" in size.  These animals will share the same, common ancestry of the Australian Shepherd, but will lose the DNA sequences which make them Aussies today.  It should be noted the Miniature Australian Shepherd (through MASCA) will remain the same as it has in years past.

WHERE DOES RUNAMOK FARM STAND?

The definition of the "perfect" Aussie will differ somewhat, depending upon the needs of the prospective owner and the purpose of said animal - as such, some variation is inevitable and must be expected.  Unfortunately, the focus of some miniature and/or toy breeding programs has become ridiculous in the quest for exceptionally tiny dogs, particular eye color, and clear - even intentional - loss of herding instinct.

While we appreciate the efforts of all sincere Australian Shepherd breeders, we disagree with blatant disregard for the original Aussie’s breed standard and purpose.  As breeders we believe it is crucial to maintain the original size variations. In the same breath, we fully understand the appeal of so-called “toy” or "lap-dog" variations - yet, it is impossible to produce animals which vastly differ from the breed standards while still maintaining the integrity of the given breed.

Looking with a critical eye at the "Toy Aussie", at some point these animals simply become too small to hold true to the original intent and purpose of the Australian Shepherd.  This does not mean the animals do not hold value, or that the programs are without merit.  It is with this line of thinking that we are pleased with NAMASCA’s quest to establish the Miniature American Shepherd as a new breed – and we wish the breeders much success in their endeavors, and many healthy, happy puppies!

As for RunAmok Farm, our mission is to produce attractive, family-oriented, naturally-reared, moderately-sized Aussies with appropriate, intuitive work ethic… and that, my friends, is what we do best!

Since our focus here has been on breed history, size and registration...  Ultimately, where does this leave us?  From a working standpoint, it is our experience when facing the typical stock animal, toy-sized Aussies are fragile, at risk for serious injury and unlikely to be effective.  On the flip-side, larger dogs tend to wear out more quickly - both in daily stamina as well as in the number of years they are able to do their respective jobs.  Neither a tiny, fragile animal, nor a large, bulky one... it is this "moderate" size where the Australian Shepherd originated, and it is this size we have purposed to produce here at RunAmok Farm.

In order to maintain our preferred range, some variation must naturally occur.  The majority of our puppies will mature between 30 - 45 pounds, technically overlapping the upper range of the Miniature Australian Shepherd and the lower end for the Australian Shepherd.  "Moderately-sized", and within reasonable ranges.

It is our longstanding opinion that bloodlines trump "registries" or "breed clubs", as the focus has in many cases shifted to looks (eye-candy) versus fitness for purpose and function.  Throughout the years, in order to access bloodlines important to the longevity of our program, we have utilized NSDR, AKC, ASCA, MASCA, NAMASCUSA, UKC and more.  Some of our foundation animals were dual-registered as Australian Shepherds and also as Miniature Australian Shepherds, due to their overlap in size - this during a time when dual registration was allowed by said registries.

For those who have stridently held fast to a single registry or breed club, this may seem foreign.  It is good to keep in mind that registries are merely databases - they do not denote quality, working ability, breeder experience or practices... and they are not what makes or breaks an animal's genetics.

If you have further questions, please feel free to contact us for more information.
Jaque, Dan and the whole RunAmok clan!
Copyright © RunAmok Farm & RunAmok Mama 2001 - 2020  All Rights Reserved 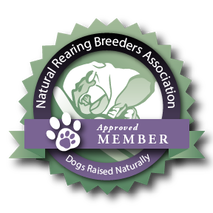